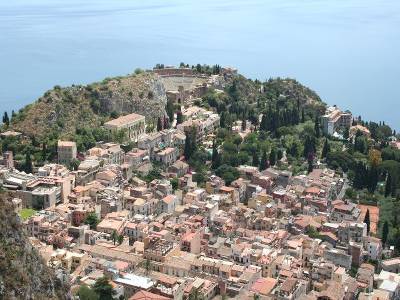 Tauromenion survived Antiquity with the same name and in the same site.

The fact that the modern town of Taormina was built directly over it meant, however, that a large part of the ancient urban fabric was destroyed and contributed much to its very particular identity.

The ancient city occupied the lower slopes of Monte Tauro towards the bay of Naxos, the first Greek colony in Sicily.

After the destruction of Naxos in 403 BC, Tauromenion replaced it in the 4th century BC. Reports of its dual foundation clearly highlight its direct descent from the earlier Greek colony.

This is also confirmed by the city’s coins characterized by the image of Apollo Archegetes. In 358 BC Andromachos, father of the historian Timaeus, gathered the survivors of Naxos and their descendents (Diod. XVI 6,7) and founded the new city, de facto Hellenizing the town that had previously been founded (in 396 BC) by the Sikels with Carthaginian assistence (Diod. XIV 59,2).

Finds in the agora area would seem to confirm the existence of a Greek settlement as early as the 6th century BC.

The Sikels had inhabited the heights of Monte Tauro (Diod. XIV 88,1). The tombs of the Cocolonazzo burial site point out early relations between native Sikels and Greek colonists, through grave goods comprising indigenous impasto pots and Late-Geometric Euboean vases.

After the foundation of Tauromenion in 358 BC, Andromachos supported the expedition of Timoleon. Under Agathocles the city lost its importance, subjected by Syracuse: in 312 BC the Syracusan tyrant exiled Timaeus. In the early 3rd century BC it regained its independence with the tyrant Tyndarion, who in 278 BC helped Pyrrhus to gain control of Syracuse (Diod. XXII 2,1; 7,4; 8,3).

This independence, however, was short-lived: in 270 BC, during the war between Syracuse and the Mamertines, Tauromenion was among the towns under Syracusan rule (Diod. XXII 13,2), as it also was in the treaty between Hieron II and the Romans in 263 BC. With the Romans the city forged and maintained good relations.

It thus succeeded in avoiding occupation by a Roman garrison during the Second Punic War and in participating in the war with its own troops. Fidelity to Rome ensured its status as an ally of the Roman people; as such it enjoyed the privileges of an allied city and was exempted from the more onerous contributions (Cicero, Verr. II, 4,50). In the first Servile War, however, it was one of the main strongholds of the rebel slaves, and only with difficulty was it re-conquered by the consul Publius Rupilius in 132 BC. Having become a Latin municipium under Caesar, it sided with Sextus Pompeius in his war against Octavian (Appian, Bellum civile, V. 449-65). 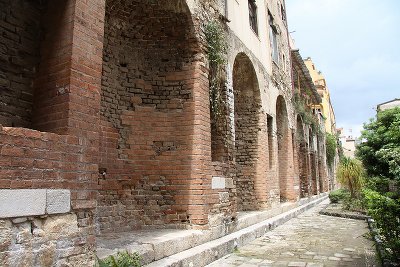 The price paid by Tauromenion for this alliance was steep: the brutal expulsion of its inhabitants and the foundation of a Roman colony by Augustus, probably in 21 BC (Diod. XVI 7,1).

We know little about its subsequent history: the city continued to enjoy some prosperity, in part due to the production of the wines for which it was famous in Antiquity (Pliny, Nat. Hist.,XVI, 26 and 66) and to the export of marble and timber, as already documented in the late Hellenistic period by inscriptions with financial accounts. The remains of public and private buildings testify to strong development and a considerable level of prosperity in the 2nd and 3rd centuries AD.

After the conquest of Syracuse by the Arabs, Taormina was considered the capital of Byzantine Sicily: not until 902 would it fall after prolonged resistance.