In the first decades of the 5th century BC a new town was built over the remains of the archaic settlement. Though the latter’s circuit of walls was preserved, the urban fabric of the new town was entirely different. It had a uniform layout, a single alignment. It was organized on a regular grid of orthogonal streets. 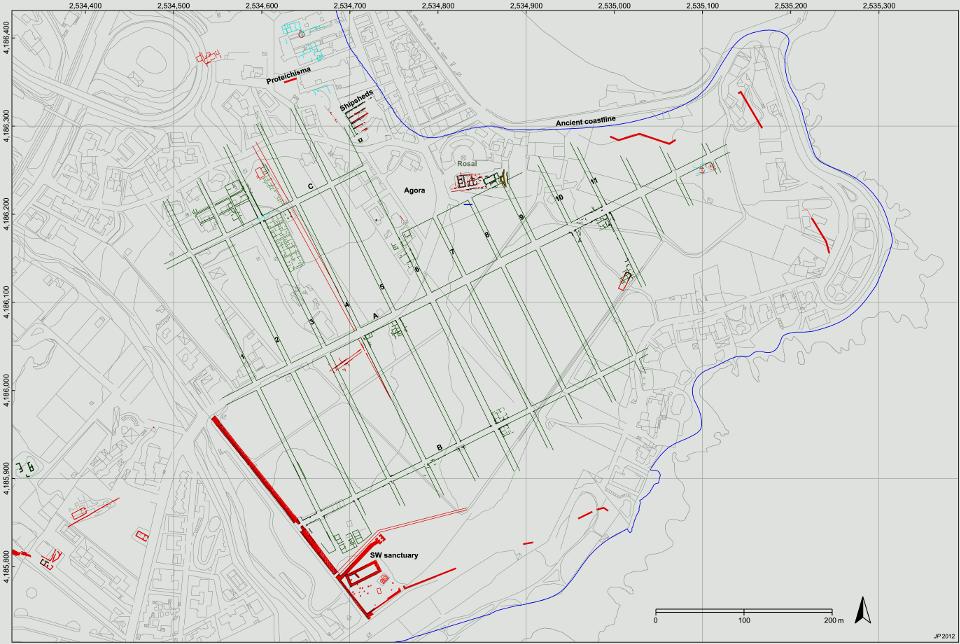 Plan of the orthogonal grid of the city(J. Pakkanen 2014).

This type of urban planning was introduced in the 6th century BC, as is well documented by the Greek cities on the Black Sea. In Greece itself the most important example is Olynthos (5th century BC). It is also widespread in the West: the grid urban layouts of Naples, Thurii, Agrigento, Himera, Kamarina . The Naxos plan is possibly the most ancient.

At Naxos, three wide street axes, plateiai A, B and C, each different in width, traverse the city from east to west, intersected at regular intervals by a series of north-south streets, so-called stenopoi (14 in all), with a homogeneous width of c. 5 m, except for the sixth from the west, stenopos 6, which is wider than the rest and is the thoroughfare that linked Naxos with Zankle-Messana, re-cycling a pre-existing road. The houses of the new town were built in the elongated insulae defined by the street grid. In the central zone these insulae measure 39 x 156 m, a size that represents the basic module of the entire urban system.

The distinctive and original character of the plan of Naxos is testified by a recurrent feature: quadrangular bases. They are repeated at each intersection along the east-west axes, and are placed at the north-west corner of the insulae. Possibly the bases of altars, they are an urban superstructure of quality (R. Martin) that monumentalizes the urban plan. 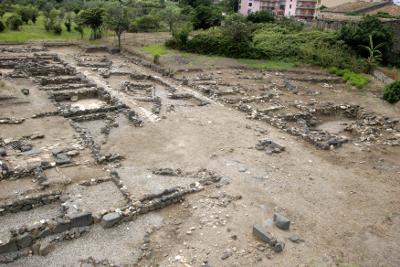 View of plateia A with the A11 crossroad. 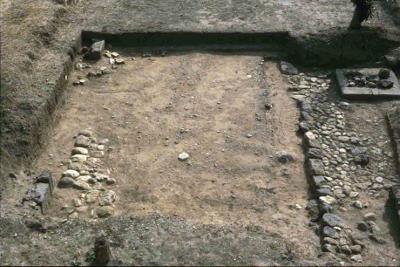 Plateia B. Detail of crossroad 5 characterized by side paved channel and corner base.

A topographical survey campaign using a total station was conducted by J. Pakkanen in 2012 and 2013. The coordination of the 5th century BC urban plan within the layout of the modern city was thus achieved with a minimal margin of error. The survey registered many differences in size and in some instances a nonconformity with the orthogonal principle; but these inconsistencies do not invalidate the modularity of the plan; they furnish valuable information on the planning phase and the procedures used for its realization.

Test excavations conducted in extension along the three east-west axes or plateiai have confirmed their identical construction: they all consist of a beaten earth surface flanked by paved gutters. 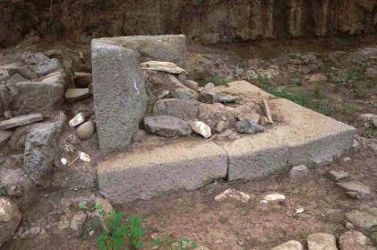 Plateia B. Detail of the corner base at crossroad 5. 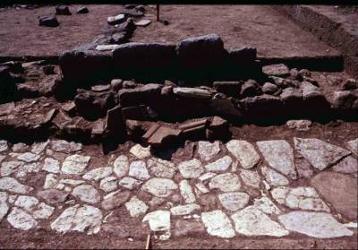 Plateia A. Detail of paved channel flanking housing block A10.

The three plateiai are each different in width. The central one, plateia A, is the widest, corresponding to the greater width of stenopos 6. This difference in width implies a hierarchization of the street system and reflects the higher status of these two streets in the urban plan, though their exact function has still to be determined. The latest excavations have located the colony’s main civic area at the extreme northern margin of the city, in close relation with the port. Here was discovered the naval arsenal and, in close conjunction with it, on a terrace overlooking the port, the agora or forum.

The latest excavations (2003-2006) conducted in the area between intersections 10-11 of plateia A have helped to elucidate the chronology of the orthogonal plan. 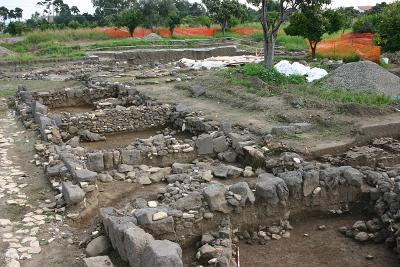 Housing block A10. Detail of the 5th century BC building phases.

They have in fact ascertained that the previous urban plan was razed. Accompanied by surface levelling and in part by the demolition of archaic wall structures, this operation is datable to the early 5th century BC and was preparatory to the construction of the new town.

This took place in two distinct phases: a first phase in the period 480-470 BC and a second phase post-460 in plausible concurrence with the return of the exiles to Naxos and the reinstatement of democracy.

In this second phase the transformations exclusively regarded the surface of houses, i.e. private property, without intervening on the layout of the city.

The final destruction of the city by Dionysius I of Syracuse in 403 BC has been verified by archaeological findings throughout the urban area.