The sacred areas are laid out on the periphery of the settlement in a kind of sacred belt (Temple C, shrines E and F).

The sanctuary, dedicated to a goddess, probably to Aphrodite rather than to Hera, occupies the south-west corner of the city, being respected by the 5th-century BC plan. Its extent still remains unknown. High walls enclose the sacred precinct. The north wall (wall E) and south wall (wall D) date from the beginning of the 6th century BC. 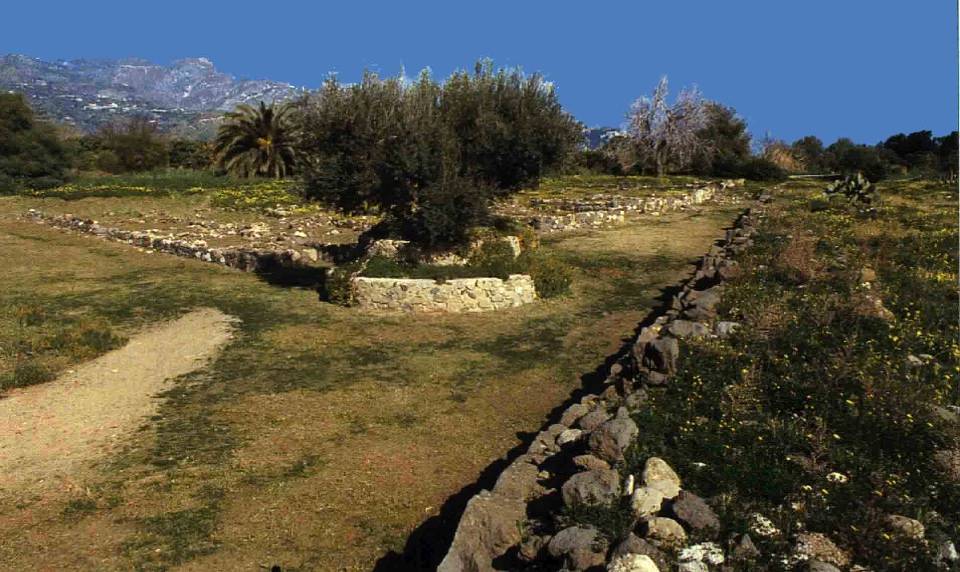 View of the northern precinct wall of the sanctuary which runs along a city street.

Wall D is constructed in polygonal technique with curving joints. The closest analogies are with the eastern Greek world, with Lesbos, Smyrna. Wall D is interrupted by a propylaeum opening towards the beach and a probable landing-place. In opposite side a propylaeum is open towards the city. The internal layout of the sanctuary is partially known as well as its distinct phases. Thysiai, some containing weapons, are concentrated close to the western façade of shrine A, dating from the 7th century BC.

Plan of the Sanctuary (Pelagatti 1973); Aerial view of the sanctuary; Iron spear heads (end of 7th century BC).

Temple B was built over it towards the end of the 6th century BC. Bases of stelai are found in the south-western sector, surrounding the altar of processional type constructed in the early 6th century BC. 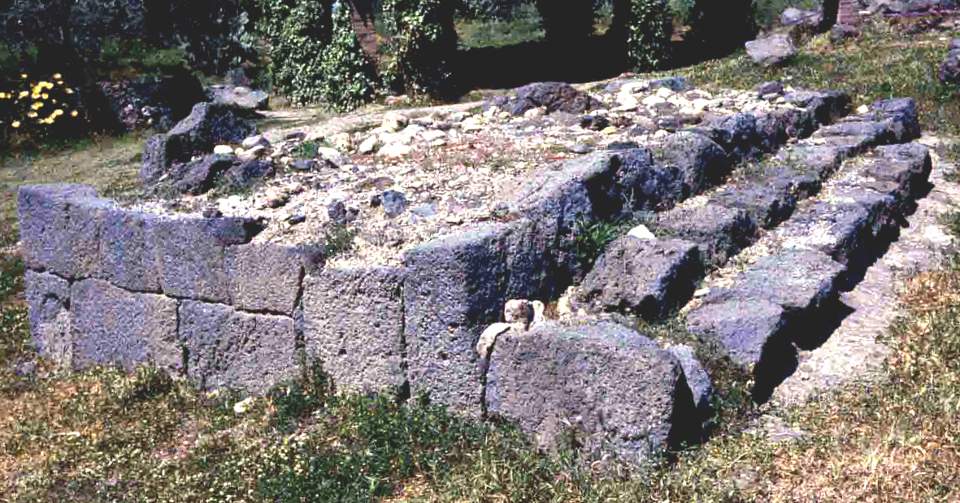 Close to altar are two kilns dating from the end of 7th century BC. 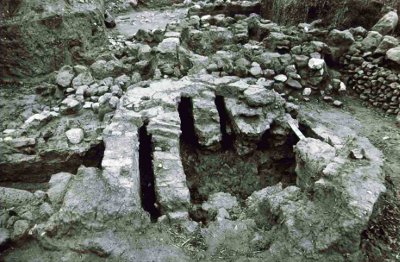 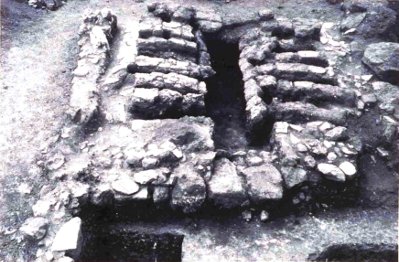 Sanctuary to the west of Santa Venera stream 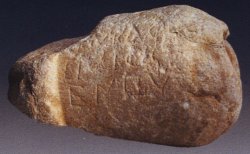 The vast sacred area, extending along the right bank of the river, outside the walls of the city and facing onto them, was first identified by the excavation campaign conducted by Paola Pelagatti between 1975 and 1978 (Scalia estate). Part of a small temple of the archaic period (Tempietto A) and the two-part building B–C aligned along a minor north-south road were excavated during this campaign. The famous cippus with the dedication to the goddess Enyò was found within the elliptical bothros H, located in the area to the east of the above-cited buildings. Inscribed in the letters of the archaic alphabet of Cycladic Naxos (M.Guarducci), the dedication remains the only explicit documentation of the otherwise unknown cult practices of the sanctuary. 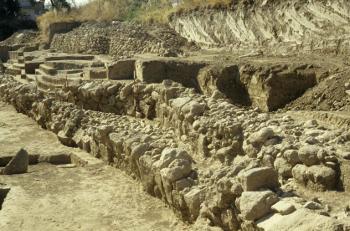 View of the long terrace wall J, from the north(1987excavations), 6th century BC.

In 1985 exploration of the site was resumed in connection with the implementation of an urban development plan that involved and would ravage the portion, closest to the ancient city, of the plain that is dominated by Etna and extends from the Santa Venera stream to the mouth of the Alcantara.

A first lengthy excavation campaign was conducted to the north of the Scalia complex in 1987. In the following campaigns in 1991 and 1992 exploration was extended to the areas to the east of the complex, now become a square of Recanati. 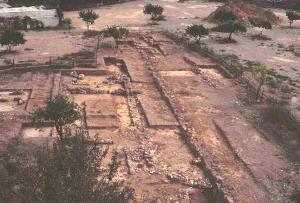 The extraordinary quantity of terracottas recovered contrasts with the relative exiguousness of the surviving structural remains in the area, insufficient as a basis on which to attempt a reconstruction of the original layout of the sanctuary. The two widely separated shrines, Tempietti H and I, and the two long terrace walls J and K, both flanked by roads (probably the same), form a rudimentary plan in which the gaps are all too evident and in which the relations between the various elements, roughly defined by the two roads, remain unresolved.

Attempts have been made to explain these gaps in the plan with changes in the morphology of the territory resulting from the flooding by the nearby Santa Venera stream. In ancient times this terrain, now almost flat, must have been undulating, the higher ground well documented by the long terrace walls J and K. This morphology would have favoured the organization of the sacred space in various separate but contiguous and interconnected temene, presumably dedicated to various deities, not yet identified. Situated as it was outside the city walls but adjacent to them, the site was undoubtedly well-suited to accommodating a temenos of Enyò, the terrifying goddess of the war-cry. The suburban location would also have been suitable for the cult of Dionysos, so important at Naxos in Sicily. The scarcity of ex-votos found on the site does not help.

The plan of the sanctuary, or at least the monumentalization of the area, can be traced back to the first decades of the 6th century BC. Such a chronology is not inconsistent with the archaeological evidence for the sanctuaries of the Greek colonial settlements in Sicily in general. The terracottas were for the most part found piled together within irregular pits dug into the ground adjacent to the long terrace walls J and K. 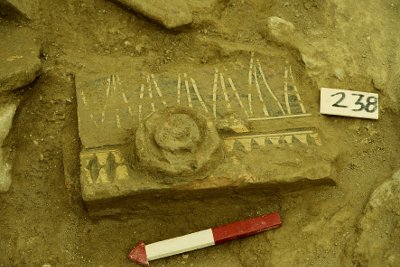 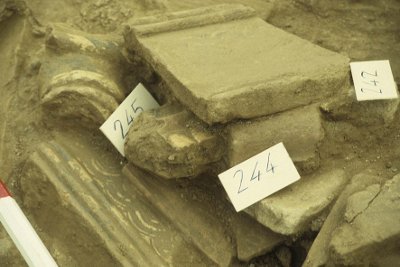 Only a few terracottas have been found at the point where they collapsed. We are referring to the elements (sima and geison revetment) of Revetment A found along the west and north sides of the Tempietto H, allowing J. Pakkanen to reconstruct the roof of the building. To those we can add some painted plaques found close to the west side of the building and which might be identified as slabs of wall decoration rather than as metopes. The nail holes strongly support this identification.

Photograph and drawing of the painting plaque related to the wall decoration (about 550 BC).

Due to the context in which it was found, Revetment A is for the time being the only one that can be attributed to a building whose foundations have been revealed by the excavations: namely, Tempietto H which measures circa 15.5 x 6.8 m and is datable to the early 6th century BC. It was approached by an access ramp or stairs, which provided a pronounced monumental entrance to the façade and underlines its resemblance to Cycladic architectural forms.

We might be led to attribute to this small temple also the thin terracotta casing presumably intended for the revetment of the wooden jambs and lintel of the door. If that were the case, the door would gain even more in monumentality. Such a revetment would also conform with the Cycladic tradition: the particular care devoted to the decoration of the jambs and lintels of doorways has indeed been recognized as a salient characteristic of archaic Greek architecture in the Cyclades (Gruben).

Some painted plaques, which might be identified as slabs of wall decoration, are of this building (cfr. Supra). 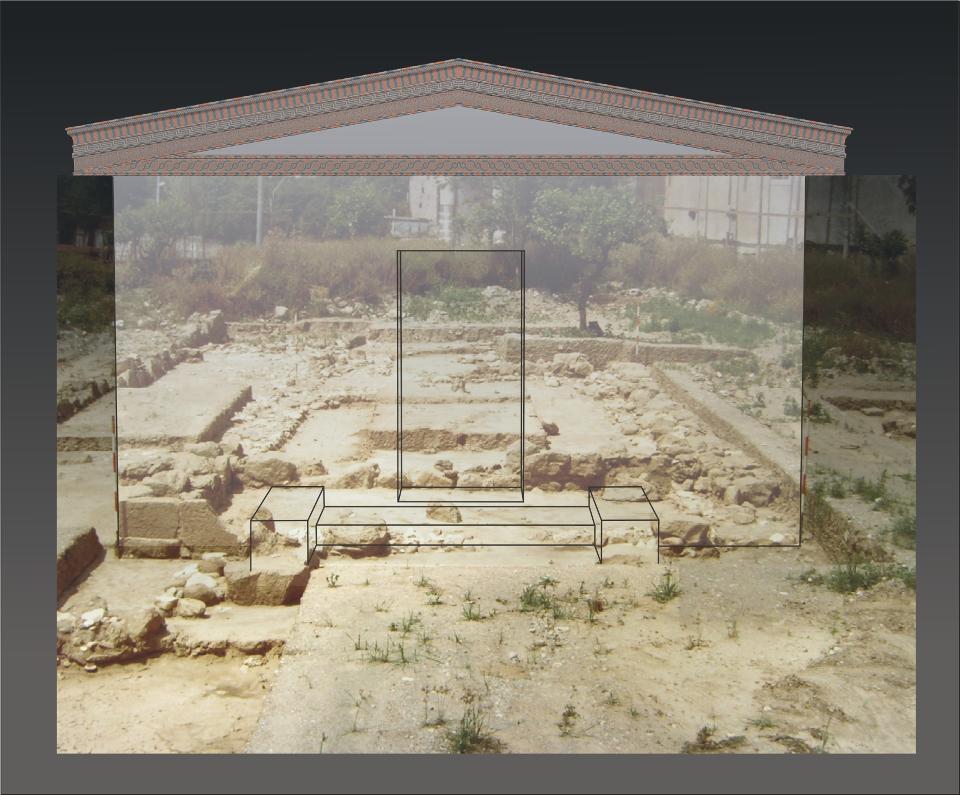 Excavation photograph integrated with a 3D perspective view of the reconstruction (J. Pakkanen 2011).

None of the revetments found can be attributed to shrine I. Well preserved in plan, this small temple measures circa 6.6 x 14.8 m with a ratio between length and width of 1:2.2. Such a proportion would in itself suggest that it is later in date than Tempietto H. All that remains of Tempietto I are the drystone foundation courses of limestone that define its groundplan.

No collapsed terracotta revetments were found in situ, and no archaeological stratigraphy is documented in the area: the terrain, devoid of archaeological levels, was almost sterile. 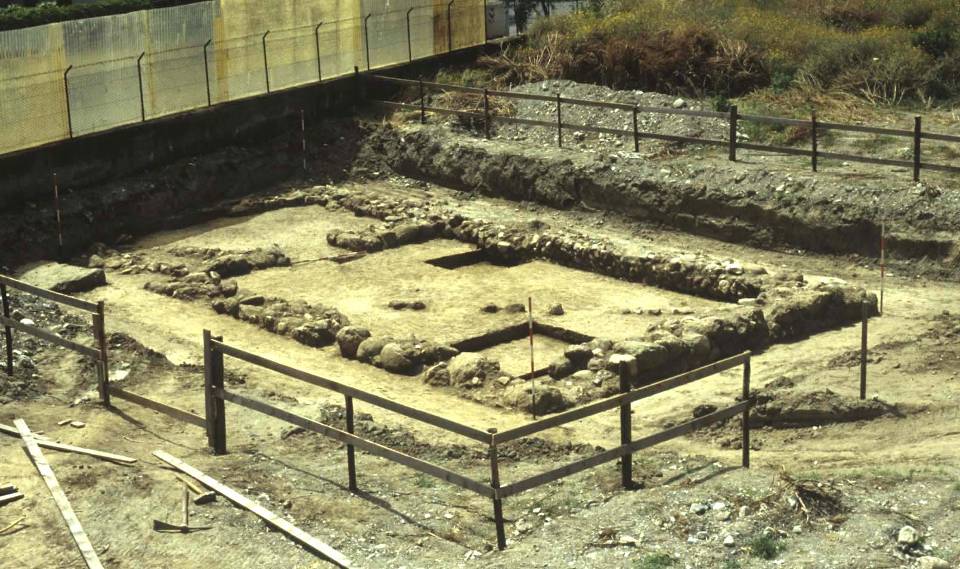