The naval arsenals of antiquity, long ignored, have recently excited renewed interest and become an important focus of research. Buildings of public character with a clear military function, they represent specific and incontestable topographical evidence for the identification of ports, or those parts of them designed to house military fleets. They spread with apparently greater frequency in the Eastern Mediterranean from the 6th century BC. Apart from their aforesaid topographical data, they are also useful indicators both of the economic resources and – at least for the earliest period – of the demographic potential of the city to which they belong.

The ancient literary sources would seem to credit their representative character, ably exploited by some cities such as Athens or Rhodes, as direct exemplification of military power.

The complex of the dockyard or neorion/neoria of the 5th century BC represents the most important discovery of the last decade of exploration at Naxos. The triremes, the most famous warships of antiquity, would have found shelter in them when they were not at sea. 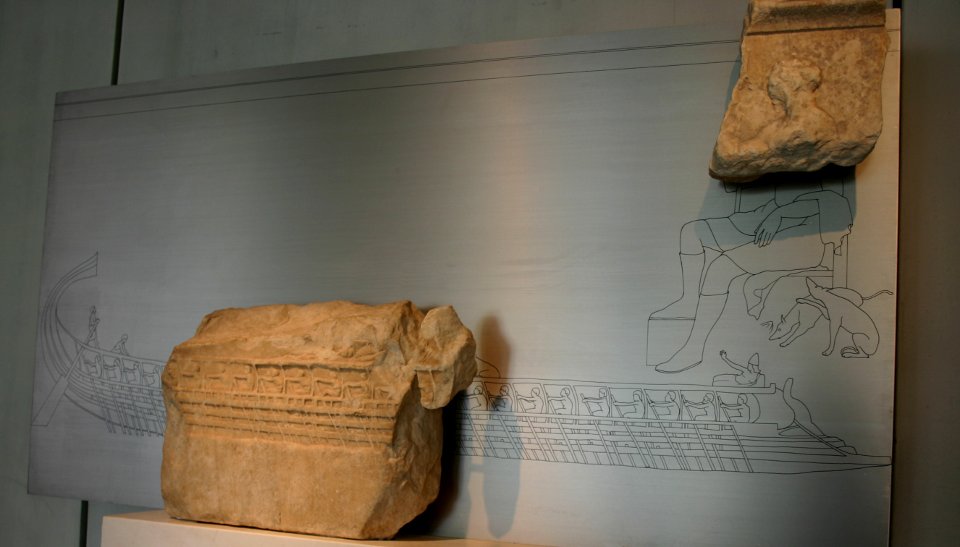 The Acropolis Museum in Athens. The Lenormant relief, c.400 BC.

The port area containing the neoria extends to the north of the urban centre in the bay protected by Cape Schisò. The building occupies the extreme eastern declivities of the hill of Larunchi, acropolis of the city. Its rear wall was aligned with the course of stenopos 6, at a distance of 150m. The complex was undoubtedly comprised within the urban fortifications and was flanked to the south by the agora situated on the terrace above. The discovery of ostraka within the neoria might be a confirmation of this. 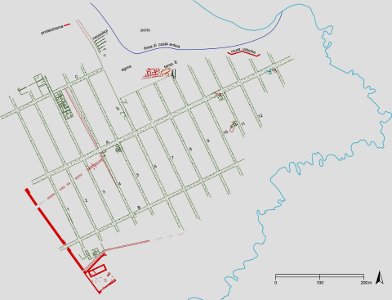 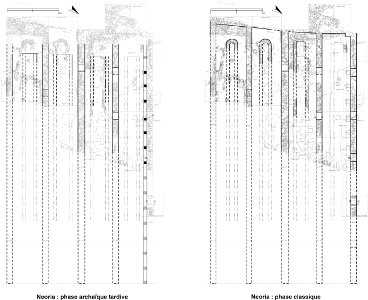 Reconstructed plans of Late-Archaic phase and of post-460 BC phase of shipshed complex (J. Pakkanen after BSA 2008).

The complex has an overall width of 28 m and a reconstructable length of 40/42m, the termination of the ramps having been obliterated by the modern buildings on the seafront. These data furnish important information on the geological position of the shoreline in antiquity, which has retreated some 160m from its current line, while its height over sea level has risen by c. 2m.

The complex is formed of four parallel and interconnecting shipsheds. They slope down to the sea and are separated by thick walls in polygonal technique; doorways facilitated communication between them. The number of shipsheds is small, but was perhaps appropriate to the fleet of a city of medium or small size which was never a naval power: an indication of the city’s relative military strength, and also revealing about its ancient demography, since the oarsmen of the fleet in the 5th century BC would have been free citizens, not slaves. 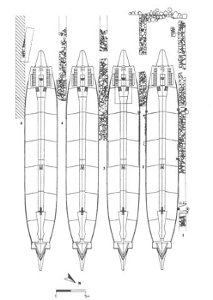 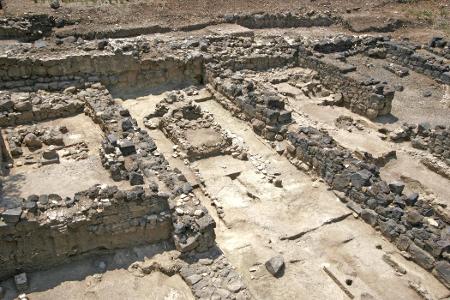 The four shipsheds each differ slightly in width (the first is 5.42 m wide, the second 5.24 m, the third 5.64 m, and the fourth 5.74 m). They all present a peculiarity so far unique among Mediterranean neoria: the centre of each slipway is occupied by a sand ramp, which contained the keel of the ship and was lined by a squat stone retaining wall. The retaining wall of ramps 1 and 2 is rectilinear, that of ramps 3 and 4 is curved to accommodate the rake of the stern. 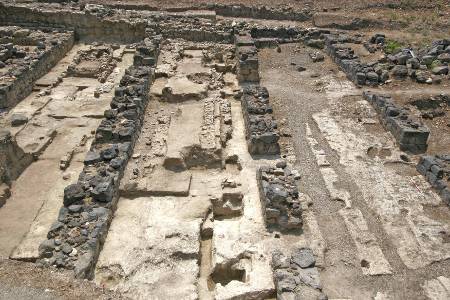 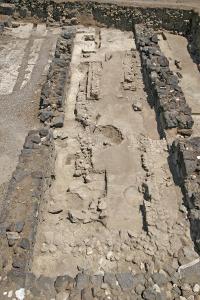 The sand ramps are flanked by paved gangways to facilitate the movement of the seamen assigned to the custody.

Patches of red colouring were found in 2004 in shipshed 3. In 2005, at the head of shed 4, traces of red pigment were found as well the blue pigment, at the top of shed 3. 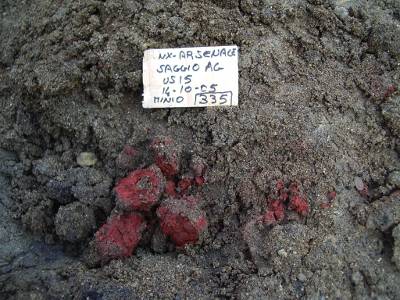 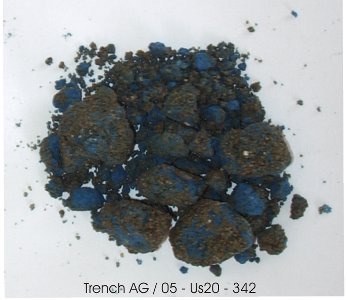 One sample of red pigment has been analysed and identified as haematite: we now have the first certain ancient sample of red paint from a shipsheds. Clearly ships were being painted in these shipsheds: at the stern (and bow) there would have been more room to paint the sides of the hull because of the ship’s cut-up.

The excavations have ascertained two consecutive phases, the first dating to the end of the 6th/beginning of the 5th century BC, the other post-460 BC, coinciding with the return of the exiles and the reinstatement of democracy in the colony.

Two different systems of roofing correspond to the two phases: the earlier is of Sicilian type with antefixes that show the unusual alternation of gorgoneia and silenus masks; the later of mixed type with pentagonal cover-tiles of Corinthian type combined with semicircular pantiles [coppi maestri].

According to the reconstruction of J. Pakkanen, the shipsheds were roofed in pairs (1 and 2; 3 and 4) by a series of asymmetrically sloping ridge roofs 10m high. 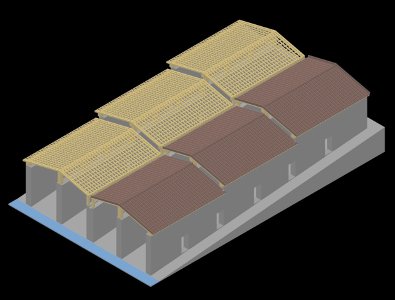 Computer model of post-460 BC phase of the shipshed complex (J. Pakkanen, after BSA 2008). 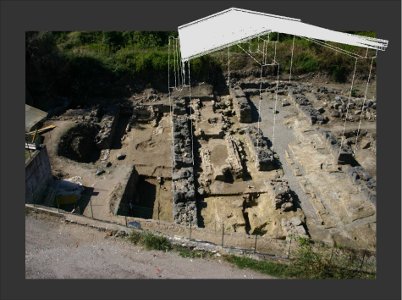 Reconstruction of the north-west part of the shipshed complex superimposed on a 2005 photograph of the site (J. Pakkanen, after BSA 2008).

The discovery in the upper part of shipshed 2 of a burial of the first half of the 4th century BC shows that by this time the complex had been abandoned; it had probably been destroyed by Dionysios I of Syracuse (403 BC). The mansio, or staging post for the change of horses, which is reported under the name of Naxion in the Itinerarium Antonini, was built over its ruins in the later 2nd century AD. 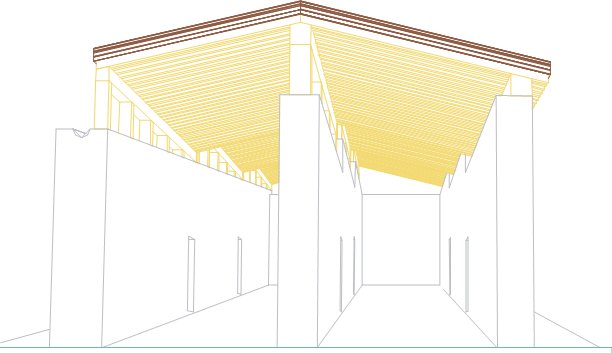 Perspective of the interior of the shipshed complex (J. Pakkanen).