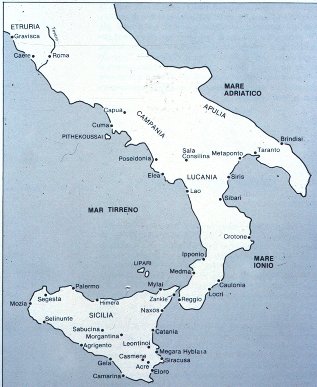 Naxos was the first Greek colony in Sicily, founded in 734 BC by settlers from Chalcis in Euboea (Thuc. 6.3.1 ) and Naxos in the Cyclades (Hellanicus FGrH 4 F82). Its primacy and the special status of its altar of Apollo Archegetes continued to be recognised by the Sicilian Greeks (Thuc. 6.3.1).

It lies on the east coast, south of Messina, at the natural landing-point for ships sailing west to Sicily from Greece. In ca 492-491 BC Naxos was conquered by Hippokrates of Gela (Hdt. 7.154); in ca 476 BC Hieron transferred its citizens to Leontinoi (Diod. Sic. 11.49.1-2). Soon afterwards, the new city with a grid plan was laid out presumably by the intervention of Hieron (not attested by the sources, but by the archaeological evidence).

For this reason the city walls and houses of Naxos were reportedly razed in 403 BC by Dionysios of Syracuse (Diod. Sic. 14.15.2), after Athens was defeated in the Peloponnesian War. Strabo (6.2.2) in the late first century BC observes that it no longer existed; but though the main urban centre from the fourth century BC onwards was a new foundation, Tauromenion, across the bay to the north, there is growing evidence of continued settlement at Naxos linked to the port until the sixth century AD, and traces of settlement until the eighth.

Reconstruction of the grid plan of the city and related surrounding landscape (J.Pakkanen).