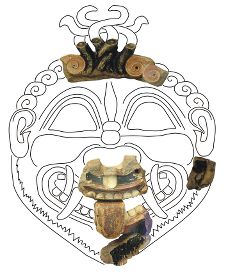 Reconstruction of the pedimental gorgoneion plaque (after P.Pakkanen 2011).

The large gorgoneion reconstructed here was discovered in successive fragments (excavations of 1977-1987 and 1991) in the suburban sanctuary to the west of Santa Venera stream. Its fragments were found scattered over a wide area and buried in places rather far apart. The reconstructable diameter of the plaque is c.1.12 m. Its shape is almost circular. Various features, its size, the absence of its rear of any traces of pantile, and the presence instead of a hole for a rivet to fix it to its support, make it plausible to assume that it might have been a terracotta relief: an antepagmentum (pedimental plaque) placed within the triangular space of the tympanum, like the large gorgoneion of Temple C at Selinunte, or an acroterion relief. Entirely unique is the convolution of serpent coils that presumably were completed with bronze heads, as is suggested by the perforations at the head of the coils.

The round curls are very similar to those of the Gorgon of the Syracusan plaque from the Athenaion. The flowing beard presents many points of resemblance with that of the Gorgon painted on one of the metopes of the sanctuary of Thermos. More in general, the gorgoneion from Naxos seems comparable to some images of the Medusa painted on some Early and Middle Proto-Corinthian vases from Corinth. c. 580 BC