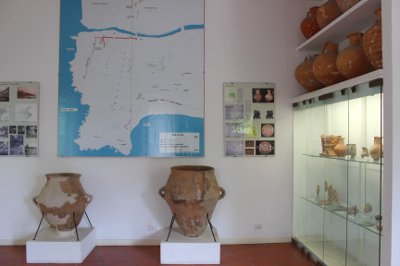 Erected on Capo Schisò, the Museum exploits the space of a former Bourbon fort that incorporated in turn an earlier watchtower built in the late 16th century to guard the mouth to the port. The Museum is closely linked to the site of the ancient Naxos: a stretch of the city’s ancient walls actually runs through its gardens. The Museum is also the starting point of an itinerary (described below) that winds its way through the ancient urban area, using a former farm track and then following the line of one of the streets of the ancient city (plateia B).

The Museum’s collections are formed in the main of artefacts found in the excavations conducted on the site for over half a century. They are complemented by a small group of materials purchased at Taormina by the early 20th-century archaeologist Paolo Orsi, or donated to him, or found during the excavations he himself conducted, as in the case of the grave goods from three burials at Cocolanazzo di Mola (a burial site excavated in 1919). Dating to the second half of the 8th century BC – i.e. shortly after the foundation of Naxos – they represent the most striking evidence of the interaction between Greek colonists and local Sikel populations. Again it is thanks to Orsi, and the close interest he took in the then flourishing market of antiquities in Taormina, that the Museum managed to acquire the artefacts from a Late Bronze Age hoard at Malvagna and the splendid repoussé decorated helmet (first decades of the 4th century BC) from Mojo, both sites in the lower Alcantara valley.

A final exception is represented by a very recent acquisition: the Heidelberg-Naxos arula (small altar) (540 BC) decorated with a pair of facing sphinxes. It was reconstructed by Paola Pelagatti, by joining together a fragment then in the Museum of the University of Heidelberg and a fragment she had acquired at Giardini in 1973. The actual re-composition of the two fragments, which only took place in 1997, has enriched the Museum with a remarkable example of terracotta sculpture produced in Naxos in the final years of the 6th century BC.

The museum display follows an essentially topographical and chronological criterion but devotes particular attention to the regrouping of some classes of materials, such as in particular the terracotta architectural decorative panels and silenus-mask antefixes, which represent one of the most significant and characteristic forms of production in ancient Naxos. These terracotta ornaments from the entablatures and eaves of temples took various forms and their production continued uninterruptedly from the last decades of the 6th century BC (Silenus A) to the mid 5th century BC (Sileni B and C). Silenus was an ancient Greek demi-god who became the faithful follower of Dionysus; the terracotta antefixes with his mask offer an eloquent testimony of the diffusion of the cult of Dionysus, whose image characterized the coins of Naxos ever since they began to be minted.

The rooms at the entrance to the museum are dedicated to the prehistoric phases of the site and the initial colonial phase. The splendid cup of Stentinello type, found not far from the Museum, testifies to the first settlement of the site in the Neolithic period, with a village of huts on the cape. The two large pithoi (earthenware jars) of the Early Bronze Age belong to two tombs with their skeletons flexed inside them; they were discovered inside the south-western sanctuary. More abundant is the documentation of the Middle and Late Bronze Age (so-called Thapsos culture), when a large fortified village extended over the peninsula, in the area now occupied by the Castle. The evidence for any Iron Age occupation of the site, at the time of the arrival of the Greek colonists, is only now concrete. 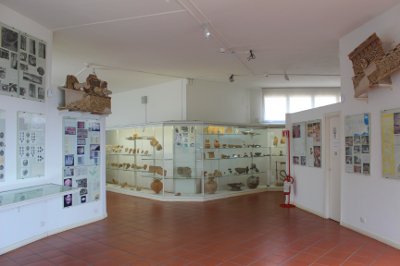 We now come to the earliest artefacts from the Greek colony founded in 734 BC. Of these a significant place is occupied by Corinthian imports and in particular by numerous fragments of Thapsos cups (740-700 BC) – so called from the site near Syracuse where the first example was found. They are deep cups, used for both drinking and eating, characterized by a narrow decorated panel, framed by horizontal lines. Pottery imported from Euboea and to a larger extent imitation wares, produced in Naxos following its foundation, are found in association with Late-Geometric Corinthian pottery in the earliest Greek levels at Naxos. The repertoire of shapes is very wide: from large pedestalled amphorae, to numerous kraters (large and deep bowls used for mixing wine), some with lipped mouth for pouring, to dinoi (bowls with rounded bottom), several types of cup – notably the bird cups decorated with a single bird – to lekanai, plates of various size, down to jugs (oinochoai or wine-pourers) with cutaway neck, a form of unmistakable Euboean derivation. The Cycladic component still remains largely invisible: but an influence of the Cyclades is perhaps to be recognized in the widespread use in the burial site of hydriai (vases for drawing and transporting water). Some examples of Sub-Geometric hydriai from the northern cemetery are displayed alongside other grave-good assemblages of the early 6th century BC. Transport amphorae have also been found in the cemetery where they were re-used for the inhumation of infants.

Of the two rooms on the upper floor, one (Room A) is dedicated to artefacts from the sacred areas, and the other (Room B) to those from the archaic and classical city and from the cemeteries of the 5th and 3rd centuries BC, with a select group of materials documenting the activities of potters and terracotta sculptors from the 5th century BC onwards. Only a limited selection of finds relating to the later phases of occupation of the site is exhibited. Rooms A and B are preceded by an entrance room, where a glass case displays a selection of locally struck Greek coins. In particular we can see here some specimens of silver coins of the classical period from the mints of various cities in Sicily and Rhegium (Reggio), all of them discovered in the northern quarter (1996 excavations). Terracotta mouldings and ornamental panels from the pediments and sides of a temple in the suburban sanctuary to the west of the Santa Venera are displayed on the walls, while a recent accession, the abovementioned Heidelberg-Naxos terracotta altar, is displayed in the central glass case.

The glass case to the left of the entrance contains ex-votos from the south-western sanctuary of the city, mainly consisting of terracotta protomai in the form of female heads dating to the late 6th century. But the only complete specimen on display was found at sea; it was recovered from the seabed near Isolabella. Some of the terracotta revetments from the roofs of the temples discovered in the two sanctuaries are displayed in the rest of the room; they include a rich selection of silenus-mask antefixes: these were the decorative termination of the covering tiles over the joints between the flat tiles of a roof, placed either directly on the eaves tiles or on the top of the sima. A place of honour in the room is occupied by the fragments of a large terracotta plaque with a representation of Gorgon (or Medusa’s head); it decorated the pediment of a temple in the suburban sanctuary to the west of the Santa Venera (580 BC). The display in this room is completed by a terracotta sphinx and siren, both of them acroteria (placed, that is, on pedestals on the upper corners of an archaic temple), and a panel with painted decoration (wall revetment, c.550 BC), all recovered from the suburban sanctuary.

The artefacts in this room attest to the material culture of ancient Naxos from the late 7th down to the close of the 5th century BC. They mainly consist of vases or fragments of vases, but among them we also find objects found in domestic contexts, such as fragments of household altars with relief decoration, statuettes, lamps and portable stoves. A model of a vertical loom has been reconstructed with some pottery loom-weights recovered from the site. The grave goods from the burial site discovered in the Recanati district in 1975 date to the 5th century BC, and include some Attic imports. The grave goods of burials of the 3rd century BC generally consist of unguentaria (small pots for ointments or unguents). Conspicuous among these Hellenistic burials is the so-called Tomb of the Surgeon, which contained a rare and well-preserved glass cup, perhaps of Alexandrine manufacture (early 3rd century BC).

The room inside the tower that dominates the garden is dedicated to underwater finds. A huge repertoire of stone anchors and lead anchor-stocks (a real archive) is displayed here; the finds were mainly recovered by divers from the seabed of Naxos and the neighbouring bays of Taormina in the 1960s.