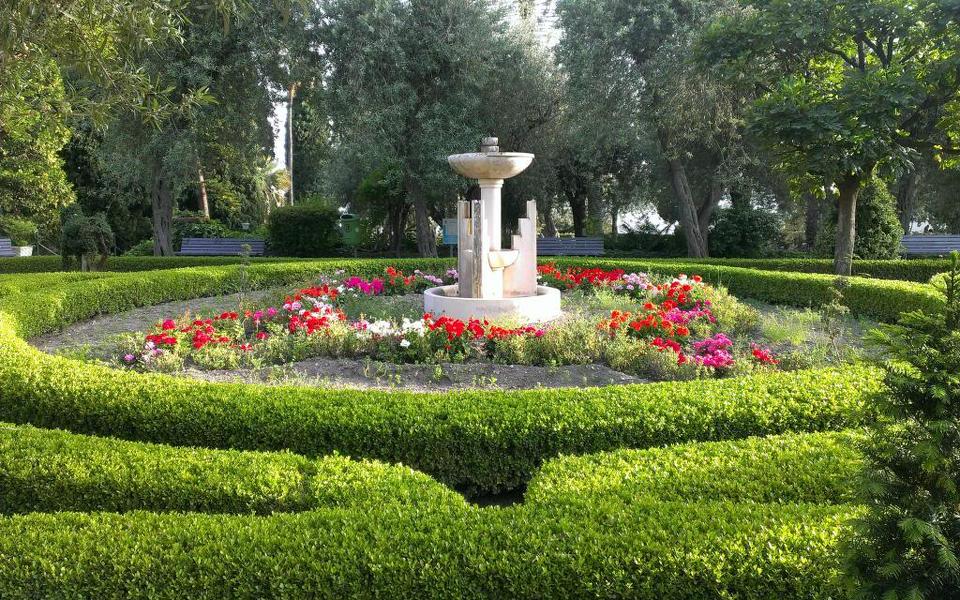 It is an irregular shape similar to that of a greatly elongated rectangle that borders to the west for 28m along Via Roma, to the north for 275m along via Bagnoli Croce, to the east for 54m along the road connecting to via Pirandello and for 285m to the south with the escarpment towering over the trunk road 114 Orientale Sicula.

The park is 280 meters in length and in the center has a maximum depth of approximately 70 meters. Proceeding slightly further upwards it has a medium longitudinal incline of 2.5% and a gradient of not more than 7 meters. 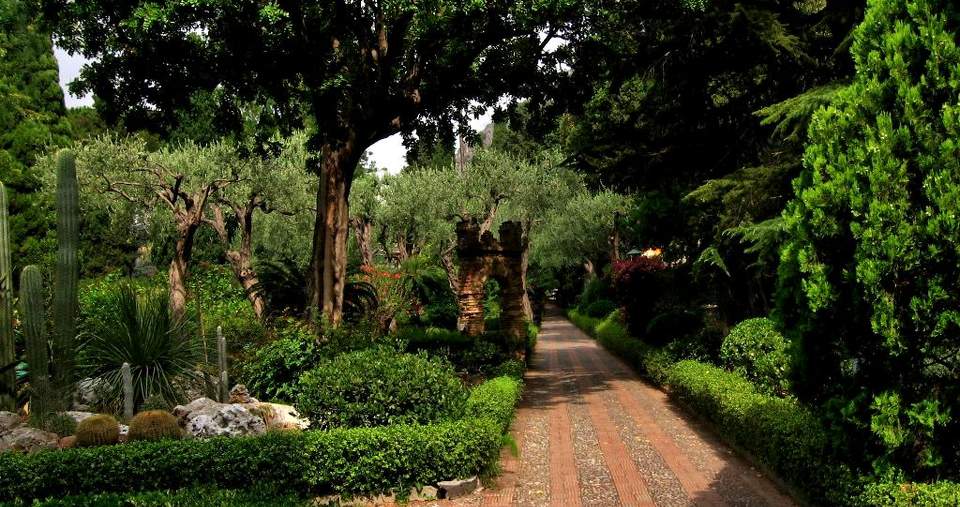 In theory, the park can be divided into three parts:

The zone at its highest point is characterized by two parallel paths that join the north side entrance with the central zone. The pine wood and the 'garden of fragrances' in front of the offices define the area at the lowest point.

The pine wood in particular is laid out in a liberal way in which co-exists two tree systems. The pini pinea form an extensive green roof underneath which grow examples of kentia, chamadorae and chamaerops.

Two large pavilions situated between the two zones demarcate on one side the square opposite the northern entrance and on the other the 'garden of fragrances' near the central part.

A long branching panoramic path acts as a border all along the escarpment for the duration of the park defined by a thick hedge of bouganville and a perforated parapet.

The birth and formation of the Park is linked to Taormina's recent history, that saw its beginnings in the middle of the XIX century, when a great influx of foreign visitors were attracted by the joyous combination of elements that Taormina reserves for its visitors still to this day: an exceptionally mild climate, unaffected panoramas and varying landscapes of rare beauty, not to mention some of the most interesting architectural and archeological discoveries in Sicily.

Amongst some of the most prominent personalities to settle in Taormina during this period were the painter Otto Geleng, the journalist and photographer von Gloeden and the baron Carlo Stempel who not only built fabulous residences and villas in the most enchanting parts of the town but also made Taormina's name famous all over Europe.

The park is a wonderful legacy from a radiant personality, Florence Trevelyan, a lover of nature and all things beautiful.

She chose to settle down in this corner of Sicily after travelling for a long period. Florence Trevelyan, the descendant of a venerable Scottish family, came to Taormina in 1889 at the age of 37, probably after being invited to leave England following a sentimental liaison with Prince Edward VII at that time heir to the throne. She stayed at the "Timeo" hotel, the only accommodation available in those days, with her five dogs and a maid for company. A year later, she married Salvatore Cacciola from Taormina, a professor of pathology at Padova University. They went to live in the 8th Century Cacciola Palace, a monumental building surrounded by a luxurious garden.

After the tragic death of her new-born baby boy, her life changed radically. She dedicated herself to philanthropic works and was treated and thought of with respect by the locals who called her 'à ngrisa' (the English woman). She was totally devoted to the planning and the actual creation of the gardens that were enriched by her original constructions (Beehives).

The constituents of the greenery 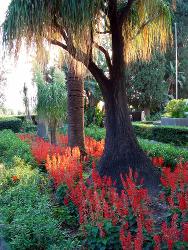 The park is characterized by the presence of different arboreal species typical of Mediterranean flora.

The three essential groups can be categorized:

The various follies inside the Park, remarkable for their bizarre and original design, represent one of the main attractions. Eclectic in style, and in part inspired by oriental buildings, their structure consists of a system of open terraces superimposed by elaborate arcading and topped by crenellations and little square turrets. Designed and realized by Florence Trevelyan Caccioli between 1890 and 1899, they are called ‘the beehives”. It was here she liked to spend her days; now they are used as small panoramic vantage points. 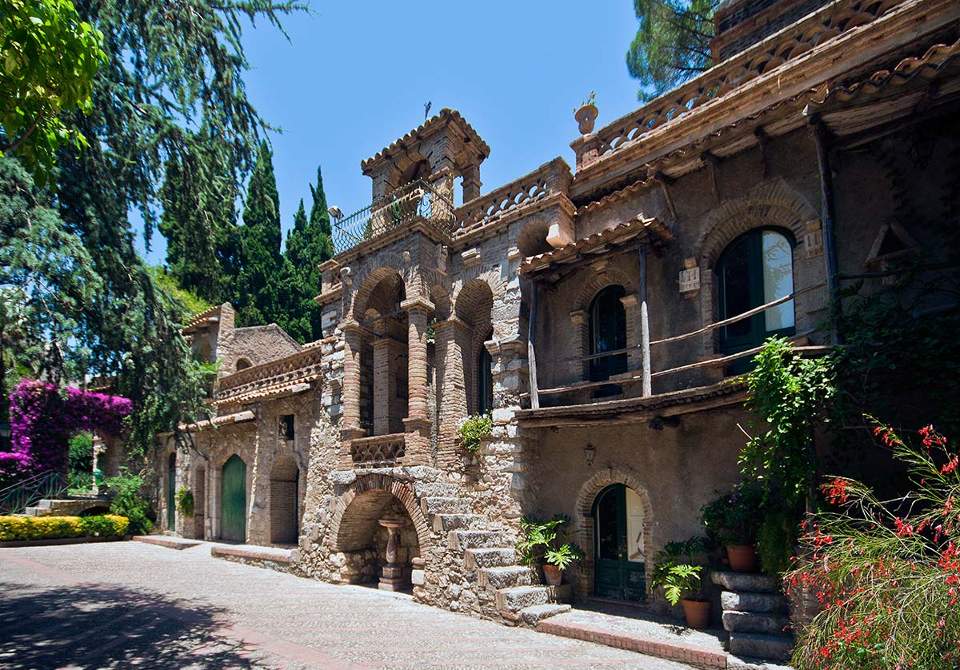 Many different materials were used in their construction, ranging from exposed stonework using ashlars of various sizes and cut for the lower stories, brickwork alternating with stringcourses of volcanic stone for the turrets, bare brick for all the vaulted parts, and rustic wooden beams for the little balconies and cantilevered parts.

The ornamental features include openwork balustrades in brickwork and decorative paving for the footpaths and open spaces. The paving is characterized by the combination of various geometric designs, and by alternating fascias of bricks and smooth and cemented pebbles, which together create a continuous grid, of great optical effect.

Relations with the environment

The Park is situated on one of the largest “marine terraces” of the coast of Taormina. These are areas of level terrain overlying steep rock outcrops formed in the Quaternary period. The gradual uplift of the terrain was caused by marine bradyseism (underwater seismic activity).

The Park not only enjoys panoramic views of the sea, but, in its design, is opened up to and enters into dialogue with the town along the Via Roma and Via Bagnoli Croce, the two roads on which its two entrances are situated. The lush verdure of the Park, together with the other gardens laid out on the slopes of Monte Tauro, blends in harmoniously with the natural environment: the west coast, the bay of Naxos and, in the background, the snow-covered peak of Mount Etna.