The town of Francavilla di Sicilia is situated at the heart of the Alcantara valley, in an area of plain at the confluence of the river Alcantara with the San Paolo torrent, on the north-eastern foot of Mount Etna. 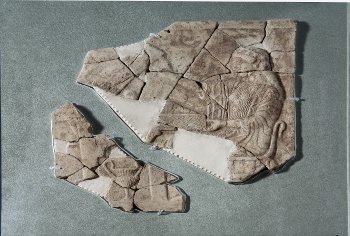 Sanctuary. Terracotta plaque with scene of Persephone opening the casket or cista, Lokrian type, 480-450 BC.

Thanks to the richness of its soil, abundant supplies of fresh water, and also natural lines of communication (from the Ionian Sea, through the Alcantara valley, and from the Tyrrhenian, by crossing over the Nebrodi and Peloritani ranges), the ancient site lies on a small plain sheltered by the steep Castle (13th century) hill. It was already settled in prehistoric times: some fragments of impasto pottery, found in the area of the ancient city, attest to the existence of a settlement inhabited by Ausonian peoples from the Italian peninsula and/or the Aeolian Islands (Late Bronze Age – Iron Age).

In the early 7th century BC, Chalcidians from the colony of Naxos penetrated into the interior through the valley of the Alcantara (the ancient Akèsines), occupying the site of a pre-existing indigenous settlement.

The name of the Greek city also remains anonymous (Kallipolis?); the edges of the Greek settlement and its cemetery have been uncovered in the area of the modern town.

A large sanctuary occupied the northern sector of the town (Via Don Nino Russotti), close to the banks of the Alcantara. The composition of the rich votive deposits found on this site testifies that the sanctuary was devoted to the cult of the goddesses of the underworld, Demeter and Kore.

In the Fantarilli district, at the foot of the Castle hill, a part of the Greek settlement of the 5th century BC can be seen: both in its town plan and in its building techniques, the houses of the Greek colony of Francavilla reveal undoubted cultural affinities with neighbouring Naxos, once it had been conquered and “re-founded” by Hieron of Syracuse in 476 BC.

The pottery found in this settlement site attests to its partial abandonment at the end of the 5th century BC: the event is perhaps to be linked with the conquest of Naxos by Dionysius I the Elder in 403 BC.

Only some fifty years later was there some demographic recovery, attested by some reconstruction of houses and alterations to the street plan, perhaps coinciding with the foundation of neighbouring Tauromenion (358 BC), or the advent of Timoleon in Sicily (338 BC). 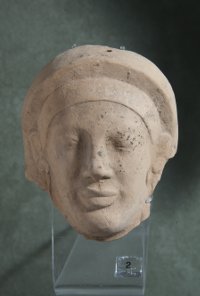 During the third quarter of the 3rd century BC the site was completely abandoned for reasons that still remain mysterious.

Outstanding among the terracotta reliefs from the votive deposits of the Sanctuary of Demeter and Kore, excavated on Via Don Nino Russotti, are terracotta plaques, so-called pinakes with figural relief decoration, similar to those found at the Sanctuary of Persephone at Locri Epizefiri.

The excavations of the Greek settlement site have recovered not only pottery of various classes and workshops, but also sculptured architectural terracottas (Silenus antefixes and Gorgon mask acroterion) of types produced and disseminated by the pottery workshops of nearby Naxos.

Notable examples of terracotta sculpture, e.g. protomes, are also represented. Coins from various Siceliot mints, again recovered from the settlement site, are also on display in the museum.

Significant fragments of Attic Red-Figure pottery have been found in the necropolis and in the votive deposits of the Sanctuary.